Classics like Tudor Style Windows still create an enviable look that will persist for years to come. Tudor Style Windows have been around for hundreds of years,  they first appeared in England in the 15th century during what is known as the Tudor period.

Diamonds glass windows like these had the characteristics that featured stucco exteriors juxtaposed with brick and stones.

They often contained exposed wood that matched the leaded glass diamonds in trim.

Arched doorways along with dark-trimmed narrow windows were another component of these designs.

How to Incorporate Tudor Style Windows into Your Home

If you have a Tudor style home, you can go with the traditional long and narrow casement-style windows. They will add to your architectural design, add a visual appeal in height for the home, and let more light in. These days, it’s not expensive to do, especially with Stained Glass Windows in your corner!

Get a FREE Quote

Open up your space to more light without sacrificing privacy 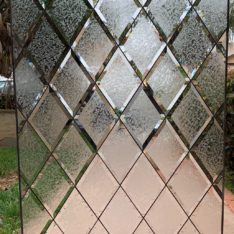 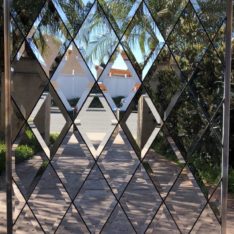 If you like the style, you can have it custom designed at no extra charge to fit any frame. Change the color if you like too or keep the traditional clear leaded glass diamonds. Regardless, it’s an enchanting look that can liven up an old home or add character to a new build.

Get a Tudor style in seconds flat.

You can truly open up a living space with these Tudor diamond windows, allowing it to overlook immaculate landscaping, the ocean, or the mountains. Add it to French doors for a more exquisite appeal, either on the interior of your home or leading out to the exterior.

Transform a boring window with a stained glass insert that you can simply hang to give it that Tudor style in seconds flat.

Diamond Glass for your kitchen

Economical solution for a kitchen upgrade as you can retain the framework. Choosing stained glass items is an intelligent idea when you want the best look for less.

Easy maintenance and cleaning to preserve the “new” look of your kitchen even after several years.

With the absence of huge curtains and awkwardly shaped blinders on your bathroom windows, maintaining a healthy bathroom becomes a breeze maintaining your privacy in style.

The stained glass windows in your bathroom will pave the way for adequate natural light negating the need to switch on the lights.

Sidelights are a perfect place to use these leaded glass diamonds to your advantage. They can brighten up a dark foyer and completely change the mood of your entryway. You can use them in kitchen cabinets or insert them into other large pieces of furniture for a grand and classic touch too.

Get your Tudor Style Windows!

There are so many ways to incorporate this dazzling classic glass form into your home. If you’d like to see how we can help you draw inspiration from the Tudor period, contact us to discover our 100% hand-cut and soldered stained glass panels.

We can even frame it and insulate it so it will help keep your home energy efficient as well as beautiful with a style that will never fade!

Get a FREE Quote Now!

During the Tudor period though, glass wasn’t cheap. Tudor diamonds windows were really something only the elite could manage to afford. Those that were poor had shutters over their windows crafted from horn or wood.

Back then, the way glass was made fetched it a high price. Making glass was time-consuming and difficult in these days. To create a diamond glass window of the Tudor style, it took a molten glass piece blown into a cylinder-shaped bubble.

This would then be set onto a table for cooling. After it cooled, that bubble would be cut, and then the small leaded glass diamonds were finally created.

From there, all these pieces would be put together to create one full window pane. The unique lattice pattern was iconic, something that adds a rich element to the design of homes even today. For the wealthy in olden days, Tudor diamonds windows used casements that hinged to open outward so fresh air could come in.

As mentioned, not everyone could afford glass during the 15th century when Tudor styles were ever-present. Even those who had Tudor style homes without the wealth behind it needed windows. They used thin slices of polished horns to try to replicate the look. Decorative shutters were also used though far more dreary than the polished horns or even the leaded glass diamonds themselves. Some even took to use paper.

But the tradition of these Tudor diamonds windows as we know it was most common in the homes of those that had an abundance of wealth. During this time period, wealth was to be flaunted. They’d show it off in grand styles to let the masses know they were rich and powerful. It also had the added benefit of bathing the rooms with natural light.

At the beginning of the Tudor period, glass was rare, but by the end of it, glass was more widely used. Traditionally, the windows in beveled glass diamonds were tall and narrow with those glorious diamond-shaped panes bonded together by lead. With more time, these panels became larger and took on a rectangular shape overall, beset with the glorious diamonds within.

We have built our reputation on exceptional customer service, the work of our master craftsman, and the atmosphere, beauty, and enjoyment our windows bring to the homes, offices and businesses of our clients.

When it comes to bathrooms, there are many styles. What everyone can surely agree on is the need for privacy. After all, you don't want to go through your daily habits while the neighbors stand with mouths agape on...

END_OF_DOCUMENT_TOKEN_TO_BE_REPLACED

Want to do something different with your home? If it's time to remodel or add upgrades, you might want to consider stained glass windows. They function as both a source of light and a work of art, changing how...

END_OF_DOCUMENT_TOKEN_TO_BE_REPLACED

Stained Glass Uses and Applications in Your Space

Stained glass has been around since at least the 7th century. Back then, it was relegated to monasteries but the beauty of stained glass quickly spread, making it a coveted functional art form in many different applications. Today, stained glass...

END_OF_DOCUMENT_TOKEN_TO_BE_REPLACED

Shedding Light on the History of Stained Glass

Whether you’re an avid lover of history or not, a quick glance at some of the oldest and most revered churches in the world will tell you that stained glass has been around for quite some time. It began...